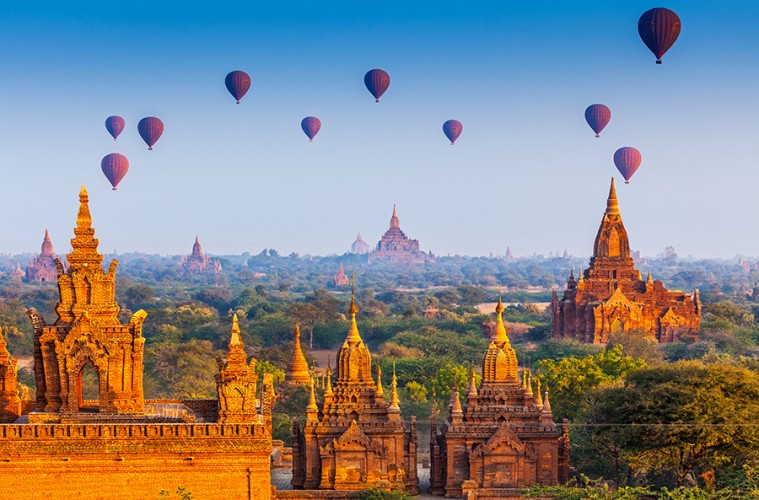 Entering mystical Myanmar via Bangkok, you’ll decompress and be ready to explore this country on the verge of change after two nights in the Thai capital.

Like a true adventurer, you’ll be transported back in time to Myanmar’s capital, Yangon – previously known as Rangoon – you’re just stopping by, but fear not, the city will be there to be explored on your return leg. You’ll be traveling immediately onwards on a domestic flight to Bagan, where you’ll pick up a very special four night cruise of the Ayeyarwady River on the luxurious Belmond ‘Road to Mandalay’ river cruiser. From its five-star decks you can spot rare, pink fresh-water dolphins (said to bring lifelong happiness to those they reveal themselves to), as you traverse miles and miles of beautiful, unspoilt countryside, stopping for some very special excursions along the way.

You can also enjoy a stunning, once-in-a-lifetime balloon ride, where you’ll float weightlessly over the most unreal, time-forgotten dreamscape, peppered with pagodas. This sprawling ancient city was originally the capital of the Bagan empire between the 13-19th Centuries – where over ten thousand Buddhist buildings – temples, monateries and universities once existed. The city is now mostly in ruin, but over two thousand buildings – mainly temples and pagodas remain intact, some still used today.

En route home, you’ll stop over in the capital, Yangon to explore this up and coming city, a unique amalgamation of British, Burmese, Chinese and Indian influences, known best for its colonial architecture – while being based at the historical Belmond Governor’s Residence.

The outline itineraries featured are for illustration purposes only. A final, personalised itinerary and price will be provided after consultation. The final itinerary will comprehensively list what is included, but generally our itineraries include luxury hotels, transfers, tours and internal flights; and exclude meals and drinks. Starting prices are subject to change based on itinerary, availability, currency fluctuations and time of year.